With Storm Barra approaching from the west, we took the opportunity to get out before the wind and rain set in.

Our first stop was Cley beach where there was very little on the sea and just a few Turnstone and gulls milling along the tideline. There was also a Grey Plover. The Grey seals were close in shore, one even hauled out briefly.

Next stop Arnold's marsh. It was striking how few birds were there, plenty of ducks including Pintail but a lot of the wading birds had moved off. Walking east along the beach, we located the Iceland gull feeding on a seal pup carcass that was down to bare bones. 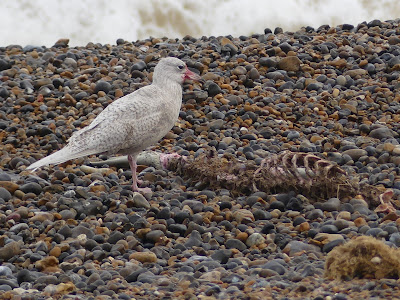 1st winter Iceland gull
Before setting back home ahead of the rain, a visit to Salthouse duck pond confirmed juvenile Mute swan 4ERJ still present with parents. The gulls were all extremely hungry and amongst the melee competing for a few scraps that we'd brought was a colour ringed gull. The code J925 was on a white plastic ring showing signs of wear with a section missing from the lower edge. The metal ring was also observed in entirety, 6205267, Stavanger, Norway. This is the first time it has been recorded here this winter and it is a regular at the duck pond with records dating back to 2014. 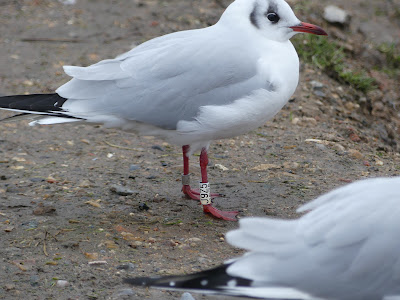 The darvic was applied in 2013 so a little wear is not surprising.

We have done our bit of twitching in the past, but with other priorities this has become a much reduced activity with a preference for seeing new birds where ever our travels take us.

We both have been ringing since 2005. Our local group is the Runnymede RG. Chris is a member of the North Thames RG and we have associations with Birdlife Cyprus Ringing scheme, East Yorkshire, Farlington, NOA, North Norfolk Farmland Study and Swale Wader RGs.

We operate sites at Stanwell Moor just west of Heathrow airport and Black Park County park, Bucks. We also do ring at home, and a couple of other local sites. We also ring with our RG at Chobham Common, Hilfield reservoir and at the Wraysbury GP complex.

Chris also has an interest in Butterflies and contains his limited photographic skill to them.

We are new in providing Mist Nets and at this stage, have a restricted range and stock in hand is limited. We hope to be able in time a variety of net sizes. We also aim provide a selection of items that you will find useful during ringing activities. If we do not supply a particular item, we aim to try and direct you to the right supplier.
www.merlinringing supplies.co.uk